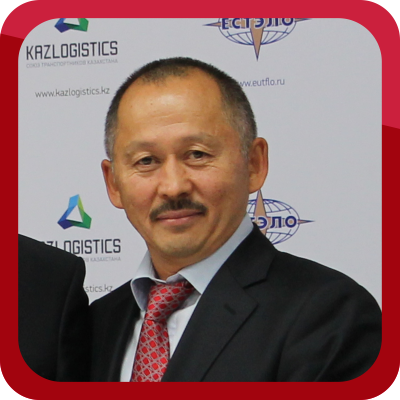 "KAZLOGISTICS", the Union of Transport Workers of Kazakhstan
General Director

He began his work experience as a train compiler of the station Alma-Ata I. After serving in the army, he worked as an officer on duty at Kurort-Borovoe station, deputy head of Novoishimskaya station, chief of Kokchetav II station, and Kokchetav in 1991-1994. Then he worked as the head of the traffic department of the Kokchetav branch, first deputy head of the Tselinna railroad traffic service. In 1997 after the reorganization of the railways of Kazakhstan, he worked as the head of the Akmola railway traffic service, then he worked as a head of the department of Pavlodar and Kokchetau roads. 1999-2001 Head of the Main Transportation of the RSE "KTZ", 2001-2002 Director of the DGP "Freight Transport". Until 2008, Vice President of JSC Kazzheldortrans. 2008-2012 Managing Director for the transportation process of JSC "NC" KTZ ". 2012-2015 Head of Staff, Adviser to the President of JSC NC "KTZ". Since January 15, 2015 General Director of the Union of Transport Workers of Kazakhstan "KAZLOGISTICS".