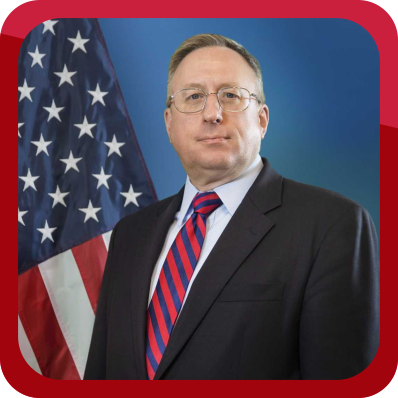 Ambassador George A. Krol was sworn in as United States Ambassador to Kazakhstan on January 8, 2015. Previously, he served as U.S. Ambassador to Uzbekistan for four years. Ambassador Krol is a career member of the Senior Foreign Service, holding senior rank of Minister-Counselor and most recently served as the Deputy Assistant Secretary for the Bureau of South and Central Asian Affairs.
He joined the Foreign Service in 1982 and served as U.S. Ambassador to Belarus 2003-2006. He has served in overseas postings in Warsaw, New Delhi, St. Petersburg, Moscow, Kiev and Minsk, and has held several domestic assignments including as Director of the State Department’s Office of Russian Affairs, and as Special Assistant to the Ambassador-at-large for the New Independent States. He has also taught at the National War College and was a member of the State Department’s Senior Seminar. Ambassador Krol is the recipient of several State Department Meritorious and Superior Honor awards. Ambassador Krol is a graduate of Harvard College and Oxford University, England. He is a resident of the state of Rhode Island.