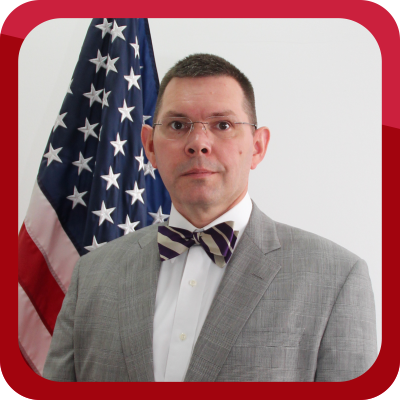 Mark Moody joined the U.S. Department of State as a career member of the Foreign Service in 1995. His most recent assignment was as the Counselor for Management Affairs at the U.S. Embassy in Riga, Latvia. Mr. Moody has also worked abroad at the U.S. Embassies in Moldova, Georgia, Croatia and Gabon as well as the U.S. Mission to International Organizations and the U.S. Mission to the OSCE, both in Vienna, Austria. In addition, Mr. Moody completed an assignment in the Bureau of European and Eurasian Affairs in Washington, DC.
Mr. Moody recently graduated with a M.A. in Strategic Studies, with high honors from the Naval War College in Newport, RI. Before joining the U.S. Department of State, he completed his undergraduate work at Harvard University, and was a Fulbright Scholar, doing research at the University of Latvia throughout 1994. He was also a travel writer and editor for the Let’s Go series of guidebooks. He is married and has two sons.