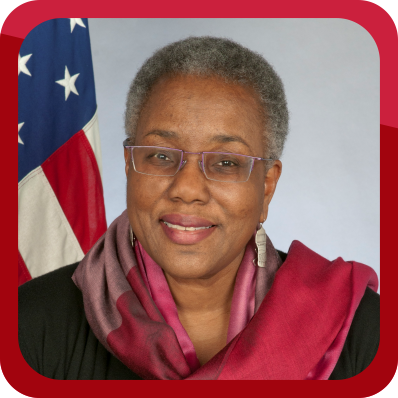 The U.S. Ambassador to Uzbekistan, Pamela Spratlen, arrived in Tashkent on Monday, January 19, 2015. Ambassador Pamela Spratlen was nominated by President Barack Obama on July 28 2014, and confirmed by the Senate on November 20, 2014. She was sworn in as United States Ambassador to Uzbekistan on December 18, 2014.
A career member of the Foreign Service, Ambassador Spratlen has over 20 years of policy and leadership accomplishment across a wide variety of assignments, including her most recent position as the U.S. Ambassador to the Kyrgyz Republic. Before serving as the Ambassador to the Kyrgyz Republic, she was Deputy Chief of Mission at the U.S. Embassy in Astana, Kazakhstan. Ambassador Spratlen’s senior Washington assignments include her roles as Director of Western European Affairs (2007-08), Director of Central Asian Affairs (2006-2007), Acting Deputy Assistant Secretary for Central Asia (December 2007 – May 2008) and Special Assistant to the Counselor of the State Department (2005-2006). Ambassador Spratlen served overseas as Consul General in Vladivostok, Russia (2002-2004). Prior to that, she served as Assistance Coordinator at the U.S. Embassy in Moscow (2000-2002). She was a Fellow and Diplomat-in-Residence at the East-West Center in Honolulu in 2004-2005. Ambassador Spratlen served in two multilateral missions, including the U.S Mission to the Organization for Economic Cooperation and Development (USOECD-Paris, 1995-1998) and the U.S. Mission to the Organization of American States (USOAS, 1992-94). She worked in the Executive Secretariat of the State Department (1999-2000) and spent her first tour in Guatemala (1990-1992).
Ambassador Spratlen received her bachelor’s degree from Wellesley College and she also holds master’s degrees from the Army War College (Strategic Studies – Distance, 2006) and the University of California at Berkeley (Public Policy, 1981). Ambassador Spratlen has received numerous awards, including the Meritorious and Superior Honor Awards at State. Prior to joining the Foreign Service, she served for almost nine years as a professional committee staff member in the California Legislature. Ambassador Spratlen speaks Russian, French, and Spanish.