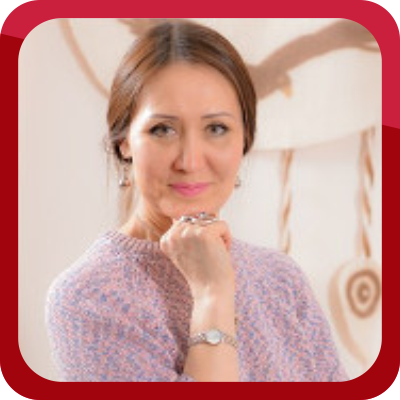 Founder and director of the company "Aigul Line", initiator and head of the artisans center Qazaq-Oner in Almaty. Member of the Council on Tourism under the Government of the RK, member of the Council of Business Women in Almaty and the Committee of the Tourism Industry of the National Chamber of Entrepreneurs of the RK "Atameken". Aigul stood at the beginning of the revival of traditional felting in Kazakhstan. She worked as the Representative of the Central Asian Mountain Program (CAMP) of the Swiss Agency for Development and Cooperation (SDC) in Kazakhstan, as well as the executive director of PF "CAMP-Consulting". Among the successful projects initiated and implemented with the active participation of Aigul and further replicated as a positive experience are - the development of ecotourism in the Saty illage, the restoration of degraded pasture lands of Zhambyl district, the revival of beekeeping in Almaty region, the creation of the brand "Aigul Line" and the Center of artisans Qazaq-Oner and many others. Ecologist, Ph.D., graduated from Kazakh State University named after al-Farabi. Passed an internship at the University of Bern in Switzerland. She has 9 international author's certificates, author's certificate for the catalog of felt products, was awarded five international certificates "The Award of Excellence of UNESCO", twice nominated as "The special keeper of national traditions" by Almaty Akimat and the National Commission for Women's affairs and family and demographic policy under the President of the RK, the winner of the popular vote of the nationwide contest "El tulgasy" ("Motherland NAME") in 2016, entered the rating of the most popular women of Kazakhstan (2016). Participant and organizer of many republican and international forums and events.